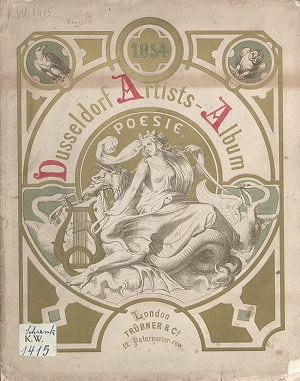 The ULB Düsseldorf possesses a unique collection of illustrated books and portfolios from artists of the Düsseldorfer Malerschule (Düsseldorf school of painters). It contains 232 titles (347 volumes) with illustrations by well-known artists from Düsseldorf, such as Alfred Rethel, Caspar Scheuren, Adolph Schrödter, Benjamin Vautier and others from the period between 1819 and 1918. The main emphasis lies on the illustration of literary works, among other literature for children and young people. What is more, the range of subjects stretches from art, music and architecture via history and politics through to sciences, geography and religion.

With the financial support of the Deutschen Forschungsgemeinschaft (DFG; German Research Foundation), the illustrated books and portfolios will be digitized, made accessible in terms of form and content as well as freely available for the public within a two-year project (from June 2009 until June 2011) (Project manager: Kathrin Lucht-Roussel).